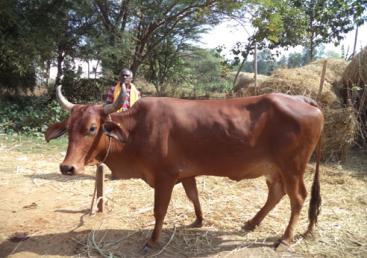 B.Mina Rao, a 55 years old farmer from Nandpun village in Koraput district is one of the beneficiary of the “Kalyani”-Integrated livestock development programme being implemented by BAIF in association with Department of Fisheries and Animal Resource Development, Govt of Odisha.

Being a small farmer of his village Rao began his association with BAIF way back in 2011. Initially 2 Non descript cows which produced 3-4 litter of milk per day. This milk he sold to his neighbour families and that money was used for his household requirement.

He explained us an account of how the cross breeding to his ‘desi’ cows lead to an increase in the milk production given by the BAIF born Cross Breed Jersey progenies. During 2011 when BAIF started to serve the remote part of Koraput district, the CDC in charge of Hikimput organised a village meeting in Nandpun where Mr. Rao got to know about the Artificial Insemination and it’s benefits. Rao got motivated and felt happy after knowing that service will be provided at his door step with a very nominal cost. When his cow came to heat he just intimated the CDC in-charge of Hikimput and the CDC in-charge artificially inseminated his local ND cow with Jersey 100% semen. For this service Rao paid only Rs.20/-. After 3 months of insemination the in-charge diagnosed the pregnancy status free of cost and the inseminated animal was found pregnant. Thereafter of six & half month from Pregnancy Diagnosis the inseminated cow gave birth to a healthy female calve.  This gives Rao a great level of satisfaction that just spending Rs.20/- he availed a Cross Breed Jersey calves which cost is around Rs.5000. From the last five year Rao has inseminated his animals 10 times from Kalyani’s CDC in charge and owned 3 Female calves and 2 Male calves. Out of them 2 progenies are in milking. Per progenies is producing 8-9 litter of milk daily. The total milk yield of 16-17 litter is being sold to the sweet shop of Similaguda and he is earning at around 12,000/- per month from milk selling. In the year 2015 he sold a female progenies at Rs. 22,000/- to his friend in same village to meet out expanses on treatment on Medical in his family. Rao is also a beneficiary of Fodder Development Programme where he cultivated fodder crops of Maize & Barseem in 0.3 acre and Root slips of Hybrid Napier in 0.5 Acre of land.   Last year in Kharif season he has produced 60 Qtl of Fodder and in Rabi 48 Qtl of Fodder. He has produced 90 Qtl of Nappier grass from his land during 2015-16. This fodder cropping supported Rao for feeding his animals. Before feeding he chaffs the green fodder by Kalyani promoted Chaff Cutter to their group. This green fodder resulted quality milk production and also minimize the cost in Feeding animals. He has also received a feeding trough for better feeding practices.

This programme helping Rao to strengthening his economy through better dairy management practices. In near future his son is planning to start a Dairy farm as the family realised the benefits of Cattle Rearing. He felt Kalyani programme provided a roadmap for his growth by better animal management practices and support service.