Odisha is known for its sizeable concentration of tribal population i.e. 22.85 percent. The scheduled tribe and scheduled caste population in Odisha constitute 39.98 percent of the State's population. With this background, the Govt. of Odisha took a tremendous step in implementing focused tribal empowerment programme that is "Odisha Tribal Empowerment & Livelihoods Programme" (OTELP). OTELP is being implemented by the Scheduled Tribe & Scheduled Caste Development Department of Govt. of Odisha with financial aid from the DFID, IFAD and the WFP. The programme aims to ensure that livelihoods and food security of poor tribal household are sustainably improved through promoting a more efficient, equitable, self-managed institution and sustainable exploitation of the Natural Resources at their disposal and through off farm/non-farm enterprise development.

OTELP Plus has been appreciated as one of the best programme of Govt. of Odisha. It created its identity because of bottom of planning, execution and monitoring process by the community facilitated by the NGOs at the field and ITDA at district level. This programme purely managed, owned and controlled by the people forming different cadres of people institutions at different level. It is formally inaugurated on 2nd October 2011 and it was operationalized from December 2012.

BAIF- Odisha is implementing the OTELP Plus programme in Nabarangpur district of Odisha in Tentulikhunti Block and allotted with 12 nos. of Micro-watersheds with 16 revenue villages, 42 hamlets, 5890 households with a treatable area of 7291.074Ha. It has the goal to enable the poor tribal households to sustainably ensure their livelihoods and food security through promoting efficient and self-managed optimum use of natural resources, non-farm enterprise development and accessing the rights and entitlements. The programme is grounded on building community based organizations, formation and strengthening of women SHGs and respecting the indigenous knowledge and values of tribal people. 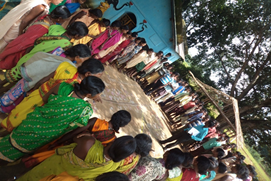 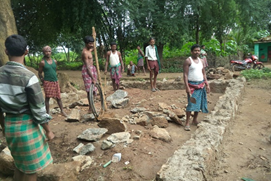